Understanding the complexity of the Earth systems and our climate is important to be able to make predictions about how they may change in the future. To do this, scientists use models which describe the relevant processes. Measurements taken in the field or in laboratory studies are always limited, but they are essential in building our understanding of these processes and in improving the models.

Due to its remoteness, the Southern Ocean is typically not well represented in the data that are used for model construction, however it plays an important role in the Earth’s climate. In many aspects the Southern Ocean is quite distinct, for example it features the world’s largest continuous water body and the cleanest environment. Many global models do not represent data from the Southern Ocean well, which points towards gaps in our understanding and highlights the need for further research. For example, observations of the sea surface temperature in the Southern Ocean are lower than those predicted by models. This discrepancy has been related to the modelling of clouds, which can have warming or cooling effect on ground temperatures depending on where and when they occur. 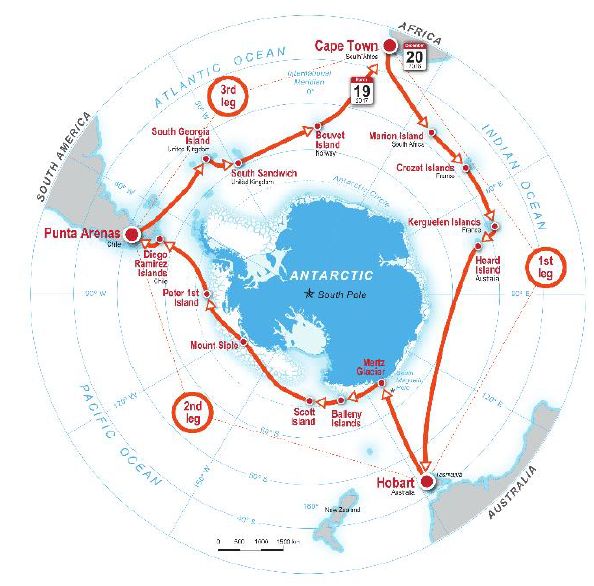 The Antarctic Circumnavigation Expedition (ACE) provided a platform for many researchers to make measurements in the Southern Ocean, and to help close gaps in our knowledge.

The ACE cruise was divided into three legs, leaving Cape Town in South Africa in December 2016, then passing through Tasmania in Australia and Punta Arenas in Chile, before returning to Cape Town in March 2017. An unusual research cruise combining terrestrial work with on-board science, ACE covered 33,400 kilometres, visiting 13 Antarctic and sub-Antarctic islands en-route, many of which are visited only rarely.

A highly international team of 150 scientists took part in the expedition on board the Russian icebreaker, the R/V Akademik Tryoshnikov, collecting millions of data points and over 27,000 samples. The expedition comprised 22 distinct projects, covering a wide range of disciplines: atmospheric science, oceanography, cryospheric science, biology, ecology, geology and others. This diversity is reflected in the data and samples themselves, providing an observational baseline of the Southern Ocean with which, for example, future observations can be compared to investigate change.

It is rather uncommon to find such a wide range of scientific disciplines on the same expedition and taking time to find synergies between the projects whilst focussing on collecting data, is not always high on the priority list. However as commented by the very knowledgeable and experienced Chief Scientist for ACE, Professor David Walton, “It’s a great opportunity to build bridges between the disciplines and to conceive a new way of thinking about the world together. Living on a ship for several weeks with no distraction but science is also another great advantage”. The unique opportunity ACE offered to try and build a holistic view of the Southern Ocean, with these unique datasets collected in the same place and time, could not be missed.

With many projects studying oceanography during the expedition and well-equipped teams monitoring the atmosphere, interactions between the sea and atmosphere seemed like a good place to begin looking for crossovers. 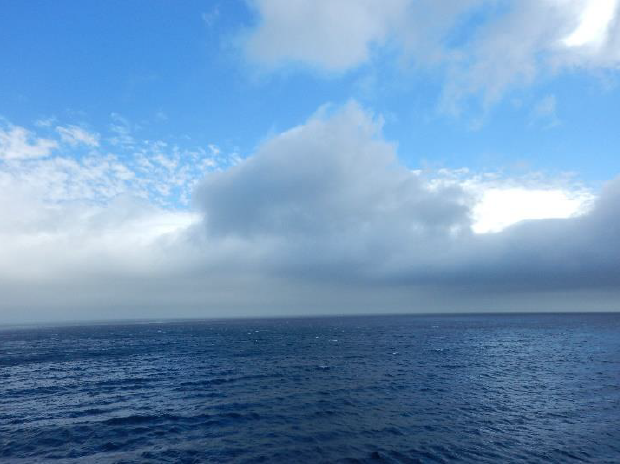 Figure 2 : Looking out on the Southern Ocean. 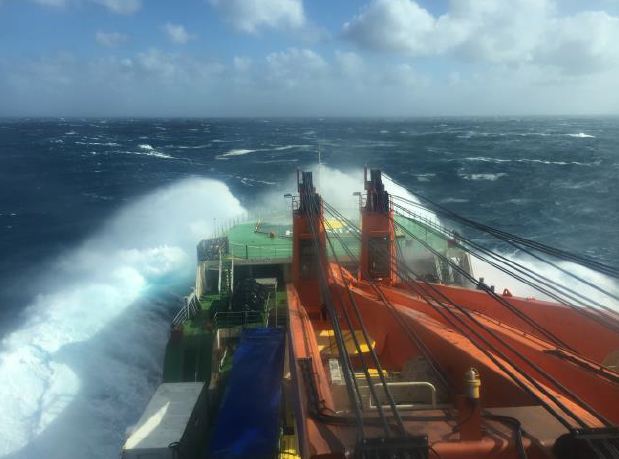 Figure 3 :  Waves crash over the bow of the R/V Akademik Tryoshnikov.

Following the successful undertaking of ACE in the southern summer of 2016/2017, the Swiss Polar Institute (SPI), the Paul Scherrer Institute (PSI) and EPFL won a grant to work together with the then newly-formed Swiss Data Science Center (SDSC). The resulting ACE-DATA project, now in its second year, is working towards two principal goals: firstly, to use novel data science techniques to obtain data-driven understanding of interactions between the sea and atmosphere, and secondly, to make the data from ACE openly accessible to everyone.

For the scientist, the real world, in this case the Southern Ocean, is something like an outdoor laboratory: they can measure what really happens out there, but unlike in a laboratory, the conditions cannot be controlled, and processes cannot be studied in isolation. This makes it challenging to link the observations to the complex underlying processes.

ACE-DATA aims to find new ways to explore relationships between the various environmental variables that were observed and measured during the expedition. For this the data scientists worked hard to harmonise the datasets before creating a tool to easily plot and compare the data. The links between the various observations may not, however, be as direct as a simple plot can describe. For example, particles observed onboard the ship at a certain time and location may have come from processes that occurred miles away and were then transported to the ship’s location by the wind. Advanced statistical and machine learning methods can come into play here, helping to tease out such complex processes that would otherwise be more difficult. From supervised regression approaches to modelling wave-aerosol interactions, to dimensionality reduction, latent variable models and clustering techniques to discover patterns in time and space, ACE data science aims to link the many observations through specific, statistically sound methods. Results are then interpreted by the domain scientists.

One key idea is to challenge physical models and their ability to explain the observed processes by a purely data-driven modelling approach and the other is to develop new ways of “looking at the data” to help with the further development of the models.

Collaboration between the data scientists and domain scientists is, in itself, an interesting process. The data from ACE is a bit of an open box: we are interested in teasing out new relationships between the sea and the atmosphere that had not previously been explored in the Southern Ocean. It is an iterative process: the scientists think of a hypothesis to be tested, which is then investigated using selected statistical and machine learning methods. When the data scientists have results which seem to show interesting relationships, they discuss these with the domain scientists to understand the processes that could underpin them. At each step, new, more precise questions can be derived and hopefully some answers retrieved, and so the process continues.

One of the goals of ACE is to make sure that all data resulting from the expedition are made openly available for use by anyone in the future. In fact, making the data available to all is one thing, but what does that actually mean? How will someone who is looking for some specific data actually find it and download it onto their computer? How will they understand the possible errors in the data or its potential limitations? This person could be a scientist looking for data to compare to their own, or to test a new piece of code or even a new theory. Or maybe a teacher would like to compare the temperature of the Southern Ocean to that of the Atlantic Ocean in a class experiment. Whatever the purpose for re-using the data, it is important that we understand how the datasets are produced, what they contain and if they have any problems.

With that in mind, the SDSC is building a new tool called Renku, named after the Japanese word for a form of linked verse collaborative poetry. Essentially Renku captures everything that happens to a dataset and the code or software related to it: you put the data in, apply some algorithms and output some derived data or statistical analyses. Everything that happens in the middle is recorded, so the complete life history, so to speak, of the data can be described. Of course this needs some good explanations to go along with it as well, to fulfil the second goal of the ACE-DATA project.

This tool is currently in development and as we speak, data from ACE are in the process of being published to the wider community. Over the coming months, we should see the amount of accessible data increase sharply as the scientists come to the end of their investigations.

With such valuable data being made available and new methods for their analysis being developed, hopefully ACE research will be used well into the future.

For more information about the project

For more information about the science conducted during ACE, see the expedition report. For details about the Renku tool, see here.

Figure 2 : Iris Thurnherr
Figure 3 : Noé Sardet
Thumbnail :  Julia Schmale
SDSC websites place cookies on your computer to give you the best user experience. By using our websites, you agree to the placement of these cookies.