If I were to ask you to think about the most beautiful scenery you have ever seen, you would probably build in your mind an image of your experience. If you took a picture of that moment, you would probably agree that it represents your memory well. The reason is that, when it comes to visual experience, images are the most natural representation for humans.

Let us repeat this thought experiment with a piece of music. We can ask ourselves:

What is the most natural representation for sound?

Here the answer is not trivial. Sound is a pressure wave that propagates through the air. Hence, it is often represented as the time series that a microphone would capture (See Figure 2). 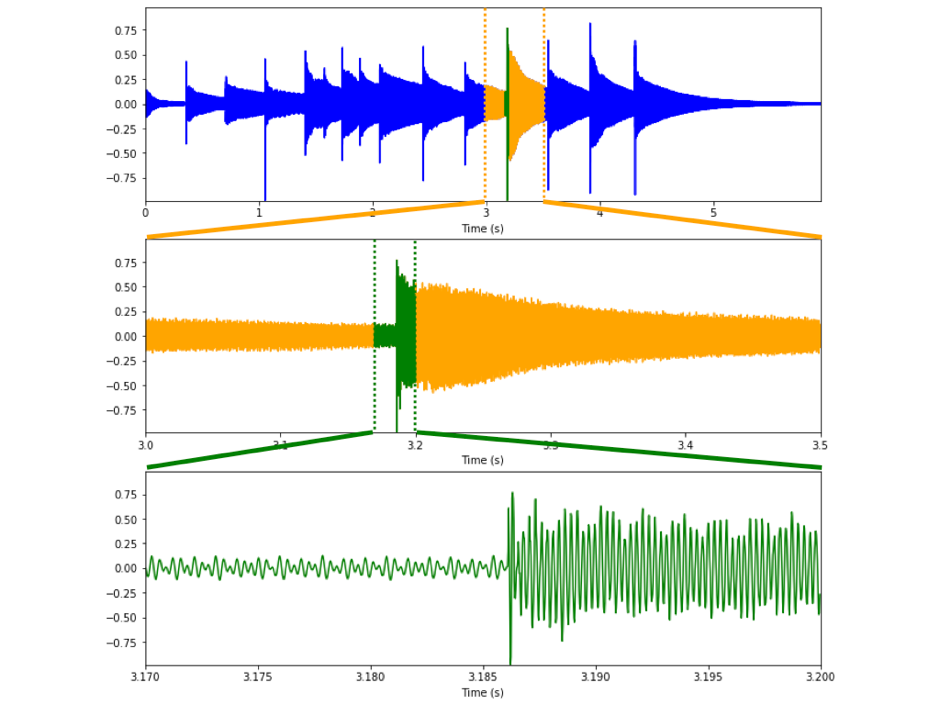 Nevertheless, while this representation is standard for any signal processing task, it does not make a good job of representing what we hear as human. Here are a few reasons why this is so. 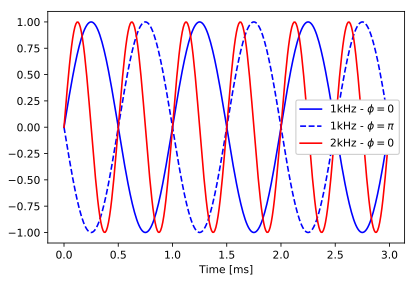 What is the phase of a signal?

The sound wave of a pure tone is an oscillation that can be parameterized by a sine function:

is the frequency of the signal and

its phase. As humans, we cannot directly perceive the phase

. For example, the two blue signals sound identically. Furthermore, the L2 norm cannot be used to measure the similarity between two signals. Even though we perceive the red and the blue signal as very different sounds, their relative difference is

, a significantly lower value than the relative difference between the two blue signals, which is 2.

When it comes to generate sound with a computer, this last point does not matter as computers have a different way of handling the information than humans. Nevertheless, the complexity added by the phase and the multiscale properties of the signal makes it way more challenging to build a generative model.

Fortunately, there exist other representations for sound. For example, the Fourier transform decompose the signal into frequencies, which are “more” interpretable as they represent the different pitches of a sound. The Fourier transform allows to represent the phase independently of the magnitude, making it simple to discard. Unfortunately, the time component of the sound is lost making it even more complex to use in generative modeling than the time series. To solve this last issue, it is possible to use the Short Time Fourier Transform (STFT), which consists of performing a Fourier transform for each part the sliced (windowed) signal. This transform outputs a Time-Frequency (TF) representation of the signal as depicted in Figure 3.

The TF representation solves most of the issues that were discussed previously as it is:

Why TF representations are generally not used for audio generation?

With this in mind, it can be surprising to notice that, when it comes to sound, most generative models still use the time representation (Wavenet [5], WaveGAN [3]). In fact, the problem mainly comes from the phase. While it can basically be dropped for a discrimination task, it has to be recovered or produced, for a generation task as it is needed to eventually reconstruct the time representation. Problematically, this is a very subtle operation as `phase recovery` remains an unsolved problem despite decades of research.

Figure 4: Raw phase of the signal. The phase structure is not easily understandable. One reason why this representation is hard to grasp is that the phase is wrapped between 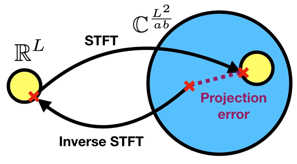 What did we do to solve the phase problem with generative models?

Math. While, in the discrete case, the phase recovery is still an unsolved problem, in the continuous case, there exist a particular TF transform that has an analytic relation linking its phase and its magnitude (See the math box).

Based on the discretization of this case, a special noniterative phase reconstruction method called PGHI was recently proposed[2]. Our work[1] defines some practical rules to build a TF representation for generative models making them optimally work with PGHI. Following these rules, the phase can be reconstructed efficiently from the amplitudes without undesired artifacts. This solves the phase reconstruction problem.
The math box 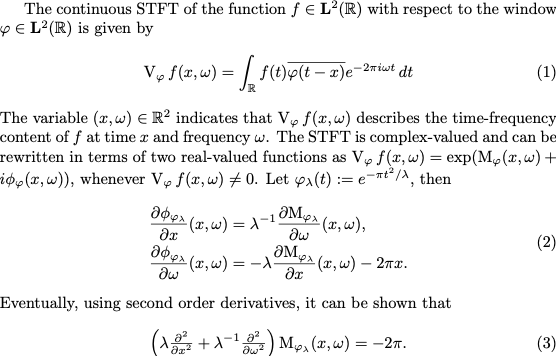 The rules we propose are geared towards allowing the network to generate consistent spectrogram, but we still need to make sure that this is the case. Even PGHI will not generate a good phase for an inconsistent spectrogram. To make sure our spectrograms are consistent, we propose a consistency score using the discretization of second order analytic relations (See equation 3 in the math box). This allows the quality assessment of the produced magnitudes and is a good proxy for the final audio quality of the signals. 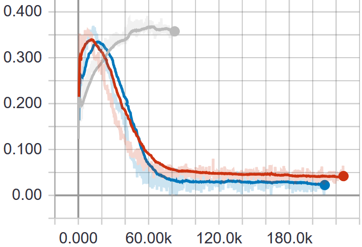 Figure 5: Here we see the consistency score through the training process. In grey, is a failling network.

We present TiFGAN, a generative adversarial network (GAN) that produce audio snippets of 1 seconds using a TF representation. Our pipeline,  summarized in Figure 6, consists of 3 steps. First we design an appropriate TF transform and compute its representation for the dataset. Second, we train training a Generative Adversarial Network (GAN). Eventually, we recover the phase using PGHI and reconstruct the audio signal. 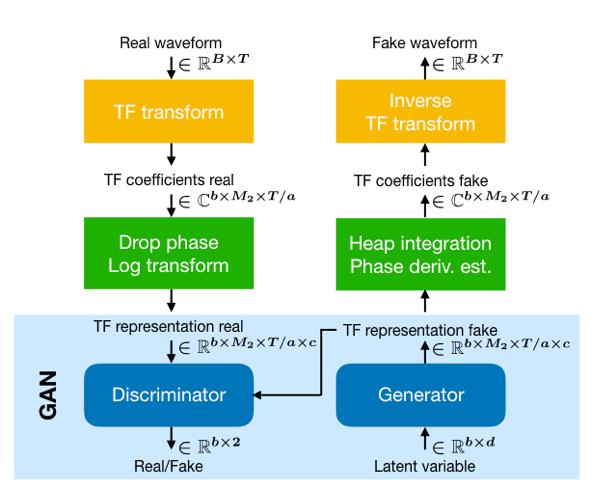 To evaluate our network, we performed a psychoacoustic experiment where the subjects were asked to choose the most realistic audio signal from two candidates. This allows comparing our network with other methods and with respect of real audio signals. Numerical results can be found in Table 1, that we took directly from [1] (Hence eq. (11) refers to [1]). We observe that TiFGAN is preferred 75% of the time over WaveGAN. Furthermore, 14% of the time, the listener preferred the audio generated than the real signals. Overall, we found out that, in terms of quality, it outperforms the previous state-of-the-art GAN[3].

Just judge the result by yourself… Here we generated 1 second audio snippets. The goal is to make them indistinguishable from the original one.

To go further you can